Call the IMA general information number to connect to any of our 6 locations at 1-877-7IMAFIT.

Taekwondo: From The Traditional Cultural Heritage to a Sport Loved By The World 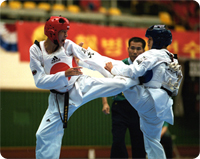 Taekwondo, which is the national martial art of Korea with a heavy emphasis on kicks, is one of the proudest cultural heritages for the Korean people. Like any martial art properly taught and properly practiced, Taekwondo is a non-aggressive and ethical system of self-defense that can benefit children, adults and the elderly.

Taekwondo has been developed into a modern sport as a result of painstaking researches and experiences by the Taekwondo practitioners through their incessant upgrading of technical and spiritual refinement. At the same time, it has been firmly established as a real national martial art enabling the people to defend the nation.

What does “Taekwondo” mean?

In 1973, at the 1st World Taekwono Championship in Seoul, South Korea, representatives from the participating 19 countries established the World Taekwono Federation (WTF). Today, there are 145 member countries of the WTF, and the global Taekwono population is estimated at 40 million people. Spurred by the popularity, Taekwono is rapidly becoming an international sport, and was first recognized as an official Olympic Sport at the 2000 Summer Olympics in Sydney, Australia.

We offer “Olympic Style Taekwondo” and Hapkido for ages 2 ½ to adult. 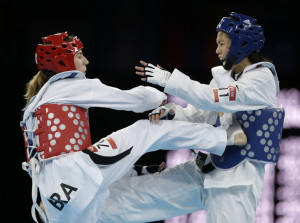 What is Taekwono?
Taekwono is a martial art developed in Korea which incorporates a variety of kicking, punching and self-defense techniques. The origin of Tae Kwon Do can be traced as far back as the Koguryo Dynasty, which was founded in 37 BC.

Taekwondo is believed to be one of the oldest Oriental arts of unarmed self-defense. Taekwondo is purely Korean in origin as the beginnings of true Korean culture are believed to have developed in 2332 B.C. with the establishment of the Ancient Korean State.

Since then, the Korean people were forced to fight to protect or regain their independence from the Chinese, the Scytho-Siberians of Central Asia, the Mongol Hordes, the Marauders, and the armies of Japan. As a result, characteristics that serve as the source of Taekwondo were created in the Korean people. These consisted of a fierce warrior spirit, an intense national loyalty and an indomitable will to survive. 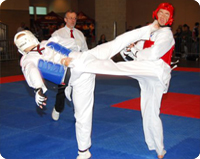 At the turn of the twentieth century, Taekwondo was outlawed in Korea by the ruling occupiers of Japan. As a result, it was practiced secretly and kept alive. In 1945, when Korea was liberated from Japan, numerous individuals from Korea were interested in taking steps to revitalize the ancient and traditional martial art.

Taekwondo derived from other forms of martial arts, but uniquely has a style all its own. It is very different from other martial arts in a few select areas. First, Taekwondo is physically very dynamic with active movements that include a mirage of foot-work skills. Second, the kicking action has progressed and continues to transform into an unmatched level of preeminence. Third, the principle physical movements are in relation to the mind and life as a whole.

Taekwondo has flourished and spread in popularity becoming the national sport of Korea. It has now become a global sport and has gained international recognition. It is included as part of the school curriculum from first grade through college and is required in the military. In July of 1980, at the Eighty-Third International Olympic Committee Session meeting in Moscow , the World Taekwondo Federation was granted IOC recognition and became a member of the Olympic Games. It was held as a demonstration sport in the 1988 Games in Korea and served officially as a full medal sport in the 2000 Olympics in Sydney.

What is the highest degree black belt in Taekwondo?

Adults earn a first degree Black Belt, or 1st Dan. Black Belts are then ranked from 1st degree on up to 9th degree. The highest rank of distinction is a 10th degree black belt who is considered to be the founder or successor of a style or Kwan (School).